Better compatibility to the Amazon CloudSearch

Changes as a daemon

Because you always have to call APIs via HTTP, now the ”–base-host” command line option for bin/gcs and GCS_BASE_HOST environment variable are obsolete. It is automatically detected from the Host header. You don’t need to give a base host name of the server to Groonga CloudSearch processes anymore.

Groonga CloudSearch Console now activates BASIC Auth always. So it asks you to register account name and password for the administration user on the initial access. The web console can’t be accessed without authentication anymore.

Account information is stored in the directory ~/.gcs-console by default. If you need to reset the password, remove the directory.

Now we are planning to suspend this project and concentrate human resources to the fluent-plugin-groonga project for scalable backend based on groonga. After that, we’ll be back and work to improve Groonga CloudSearch with scalable backends.

On the other hand, now groonga project has started a search system based on scalable backends, with fluentd. It is the most important feature of Amazon CloudSearch but not supported by Groonga CloudSearch.

Because both changes require many many codes around the database layer. We’ll need to rewrite codes for the scalable backends in the feature, even if we now implement default value and other features. So we’ve decided to suspend this Groonga CloudSearch project for a while and concentrate development resources to the scalable backend.

Better compatibility to the Amazon CloudSearch

Now Groonga CloudSearch CLI (Command Line Interface) tools accept “-e” (or ”–endpoint”) option to specify the endpoint of the configuration API. For example, if your remote Groonga CloudSearch server is accessible with the URI “http://gcs.example.com:7575/”, then you’ll run the gcs-describe-domain command like:

By these changes, now gcs-commands are incompatible to the old one.

Improvements as a daemon

Simple access control feature is now available. Specifying a pair of username and password via a command line option ”–auth” or an environment variable “GCS_CONSOLE_AUTH” will activate BASIC Auth. For example, if you wish to use “admin” as the username and “abcd1234”, then you’ll run following command line:

If you are running the Groonga CloudSearch Console as a daemon (installed from the debian package), then configurations including authentication are configured via the file /etc/default/gcs-console.

Then, you’ll be able to deploy Groonga CloudSearch Console to a public space.

(However, this is just temporally feature. In the future releases, we’ll add UIs to set and change the password via the Groonga CloudSearch Console itself.) 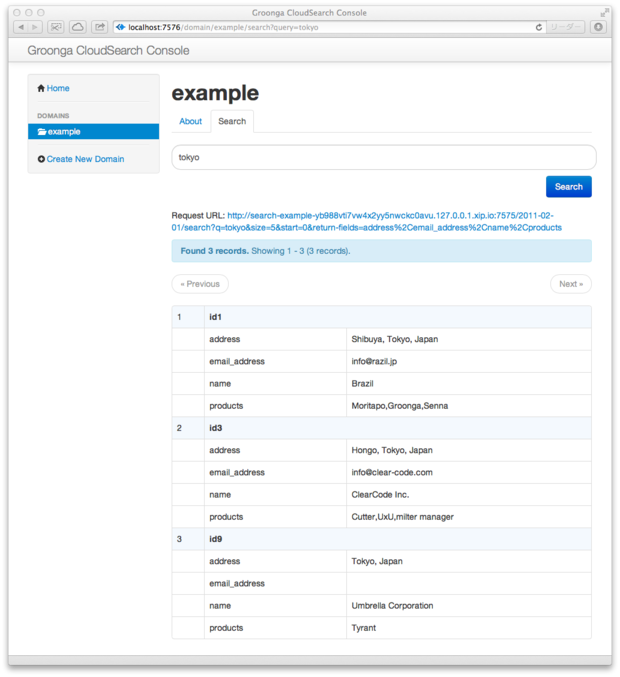 Today, we’ve shipped Groonga CloudSearch version 1.2.0. You can download the package and read the tutorial on the home page of this project site.

Groonga CloudSearch 1.2.0 includes many many improvements, and they can be described as the following three topics.

Simple access-control mechanism is now available, so you can deploy Groonga CloudSearch to a public server safely.

For the first change, you need to re-create the whole database before running Groonga CloudSearch 1.2.0. Run the following command to clear the database: rm -rf ~/.gcs

You can store multiple values to an index field, and set the field to “facet returnable”. Then you can get a facet information with a part of a search result specifying the “facet” URL parameter, and you can use the result for a new search condition via the “bq” URL parameter. For example, if you have a literal field “tags”, then bq=tags:'science' will return a search result including documents which have “science” as a member of its “tags” field.

They are helper tools which are compatible to Amazon CloudSearch’s command line tools. You can setup your search domains only with command line tools, so you don’t have to use the configuration API via HTTP anymore, for basic usecases.

Today, we’ve shipped Groonga CloudSearch version 1.1.0. You can download the package and read the tutorial on the home page of this project site.

New actions, “DeleteDomain” and “DeleteIndexField” are available for the Configuration API. Now you can delete existing search domains or index fields via the API.

“IndexDocuments” action is also available. However, because Groonga CloudSearch rebuilds indexes automatically, you don’t need to call the action manually in most cases. (Of course, still useful for optimization.)

And, now Groonga CloudSearch accepts “delete” type batches via the documents/batch API. You can delete already-indexed documents from the database.

This article describes how to use Groonga CloudSearch with aws_cloud_search.

In this article, we assume that you

First of all, let’s try searching with Groonga CloudSearch and aws_cloud_search. In this section, we will use the documents prepared in the tutorial to search for simplicity of explanation. You need to finish the tutorial before you proceed. The way to index your own documents with aws_cloud_search will described in the later section.

Install aws_cloud_search. We use RubyGems. Run gem install asw_cloud_search on your terminal.

Prepare a script to direct the requests to Groonga CloudSearch

As the URLs that aws_cloud_search to connect with are hard-coded, we need a small patch to modify them.

Save the following code as dirct_to_local_gcs.rb.

This code overrides aws_cloud_search to direct its requests to Groonga CloudSearch, which is running on localhost:7575.

In order to illustrate how to make search requests with aws_cloud_search for Groonga CloudSearch, we create a small script to search the example domain on localhost:7575, which is created the tutorial.

Save the following code as search.rb.

You can execute the search with the script by ruby search.rb [query]. Don’t forget to start gcs server on localhost:7575 beforehand (See details in the tutorial).

It works. You can modify this script to fit on your needs.

This section describes the way to index your documents by aws_cloud_search. For explanation, we create a simple CUI tool to index an entry given from command line arguments.

Save the following code as index.rb.

The document is successfully indexed.

Search by query tokyo again to check if the new document is searchable.

The number of hit documents have increased to 4 (formerly it was 3), as it includes the new document. The last document is that we have indexed by index.rb script.

Removing document is done by the quite similar way to indexing. Save the following code as delete.rb.

In order to delete the document with id = id11 (the document added in the previous section), run ruby index.rb id11.

The removed entry, Snowy Corporation is no longer appeared in the search results.

Amazon CloudSearch provides ability to index and search various documents in the cloud. You can upload documents and get the search result as JSON resources via its Web API. So, you can build Web applications easily, without setting up your custom search system (Solr, etc.) - instead you can use Amazon CloudSearch as its back-end.

However, there are two issues. First, you have to learn about how to use Amazon CloudSearch API, from the documents. Secondly, it is a fee-based online service, so you have to pay money to try any features - even if you just want to learn the API. So, it may be hard to try the API.

How Groonga CloudSearch helps you?

Currently, Groonga CloudSearch supports only some basic features of Amazon CloudSearch APIs. We are keeping up to grow the compatibility. If you’d like to get involved, fork the repository on GitHub and send pull requests to us, please. Of course, we also welcome your feedback.